The mid-day sun is drenching the landscape in golden late-summer light, and the sea before me sparkles that glorious cobalt blue that makes Greece’s coastline famous.

As I approach the water’s edge my mind drifts to summers past, when I came here in search of solace and healing.  From the serenity of this beach, now empty of the hundreds of tourists that populated it merely weeks ago, I now feel ready to cast the burdens of my history out to the healing waters of the Aegean Sea.

Surprisingly, this was perhaps the most profoundly healing summer of them all.

“But I thought I was done…”  I kept saying to my spiritual advisor and energy healer during our sessions.  Frustration was starting to creep in.

And herein lies the “problem” on the path to true self-awareness; we never stop seeking and discovering, piece by piece, who we really are.

For me, the warning signs actually came at the end of spring.  After a trying 9 months in quarantine (which by the way, I believed I was handling amazingly well!) my health fell into a steep decline.

“What’s going on with me?”  I wondered.  Several doctors’ appointments and expensive diagnostic tests informed me of what I had already suspected…that I still had deep healing to do.

So what was it?  What had been deposited so deep inside my psyche that it escaped even ME?  How was it that I was attracting this state of dis-ease?

I had to consider this from a different perspective.  What am I missing?  What haven’t I released?

And the answer was that I had to go deeper.  Deeper than I have ever had to before.  Not because I hadn’t done a “good” or “thorough” job of processing my emotional wounds in the past, but because of a much deeper realization, which was that…

…the layers of my being were only showing me what I could handle and release at that time.

Which is why it is so important to be well versed in the art of self-awareness as we move through this beautiful adventure called LIFE!

This realization had to come with time.  To corral my Ego and turn my focus back inward with love and compassion, so I could re-confront the wounds that I could not face before.

And this all started with the blessing of illness; that my body had moved into a state of dis-ease to get my attention!  It was saying, “hey…there’s still stuff in here if you’re ready to deal with it…”  It gave me a choice!  Because I could have gone on ignoring symptoms, or working against them.

Perhaps if I hadn’t come so far in my own journey of self-awareness, I wouldn’t have even realized that this was emotional rather than physical.  This was my blessing.

Armed with this knowledge, I committed to a strict regimen prescribed by my physician and began the familiar inner work to release what was emerging, one deep wound at a time.

Within 2 weeks, the healthy and vibrant body I remembered was beginning to re-emerge.  My mental state improved and the physical symptoms that had been causing me months of distress were gone.  It was nothing short of miraculous.

I faced several changes this summer.  Adopting a new lifestyle and philosophy to maintain my optimal level of health and wellness.  “Letting go” of my son as he began his bright new academic career in boarding school, and re-establishing relationship boundaries with my aging parents, who moved close to me once again, just to name a few.

Somehow I feel “NEW”.  Like something big has shifted.

And so, I start to make my way into the sea, ready to release each emotion of the past as it has come to the forefront of my awareness.  Without fear, resentment, or judgment, I allow my spirit to be replenished as I submerge my body in the cool, clear water, feeling blessed and grateful for all of it. 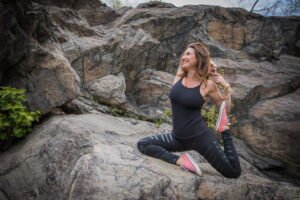 Kathy Casa is the founder of Yoga Dynamis, a health and wellness retreat center and online studio. She is an RYT 500 teacher, aromatherapist and life coach specializing in trauma release and recovery.

This website uses cookies to improve your experience while you navigate through the website. Out of these cookies, the cookies that are categorized as necessary are stored on your browser as they are essential for the working of basic functionalities of the website. We also use third-party cookies that help us analyze and understand how you use this website. These cookies will be stored in your browser only with your consent. You also have the option to opt-out of these cookies. But opting out of some of these cookies may have an effect on your browsing experience.
Necessary Always Enabled
Necessary cookies are absolutely essential for the website to function properly. This category only includes cookies that ensures basic functionalities and security features of the website. These cookies do not store any personal information.
Non-necessary
Any cookies that may not be particularly necessary for the website to function and is used specifically to collect user personal data via analytics, ads, other embedded contents are termed as non-necessary cookies. It is mandatory to procure user consent prior to running these cookies on your website.
SAVE & ACCEPT

Get access to my FREE Training The 5 Shifts to Triumph Over Trauma and Discover Your Radiance.

This is the first step to recovery, let’s take it together.